Special Olympics is a Part of the Family 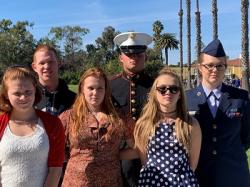 For the Barber family, Special Olympics has become a part of life.

Seven members of the family participate or have been involved with Special Olympics; including Pam, a mother, head coach and area director for Winnemucca; and her six children, five of whom volunteer as coaches and one, Eric, who has been an athlete for more than 10 years.

“We found Special Olympics when Eric was around nine and realized that it was the perfect fit for him,” said Pam, who explained that Eric had previously had trouble fitting in with ‘typical’ sports programs. “He absolutely loved it and made a lot of friends.”

Eric competed without the rest of his family’s involvement for his first year but, as Pam explained, they’re not ones to just sit and watch from the sidelines. Pam became a coach and her children, as each got older, all made the commitment to get involved. Currently, four Barber children support their mother as coaches for Winnemucca: Becky (25), Leann (20), Breanna (18) and Mary-Kate (15). Anthony, Eric’s younger brother, also volunteered as a coach but is away from home with the military.

“They do a great job,” said Pam. “All of them are hands-on and on the field as coaches. Breanna also does a lot with the paperwork, which makes me so happy. Paperwork is my nemesis – but she helps me get everything submitted on time. This is a big part of our lives.”

And the Winnemucca Special Olympics program has even benefited from a secondary boost from the Barber family - the boyfriends and girlfriends also come to volunteer.

“If you want to date them, you have to come help with Special Olympics,” said Pam. “It’s kind of a requirement. That’s going to tell me what kind of character you have and if you’re good enough to date my daughter or son.”

“Although when they break up, [the boyfriends/girlfriends] tend to go away,” said Pam with a laugh.

Off the field, Pam is a special education teacher at Grass Valley Elementary School and was named Special Olympics Nevada’s Teacher of the Season in spring of 2017. Her daughters, Breanna and Becky, are also interested in pursuing a career in special education. They believe in the utmost potential for individuals with intellectual disabilities, like Eric, and are passionate about supporting them both on and off the field.

“Special Olympics provides an opportunity to show the athletes that they can do it,” said Pam. “I have very high expectations for them and I know some strategies that can help make them successful. For Eric, it gives him opportunities to go out and do things that he might otherwise not be able to do. And he’s very successful. Sometimes he’ll get a gold medal, or another medal, and other times he might not do as well and then we talk about ‘Well, what do you think?’ ‘What do you think happened?’ What do you think you can do better?’ We come up with a game plan on how he can improve.

Every athlete is different and has different ways that they can grow – and my job as head coach is to ensure that is happening.”