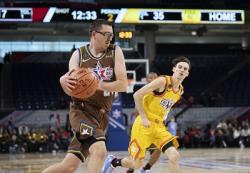 Special Olympics Nevada Athlete Rob of Las Vegas recently experienced the opportunity of a lifetime during the 2020 NBA All-Star Weekend in Chicago.

“I liked getting the experience to bring back to my Nevada team,” said Rob. “I hope I made them proud. I learned a lot, especially from the Special Olympics coach, Anne Lynch, because she did a lot of different drills with us. We had to work very hard at practice.”

Along with competing in the fun exhibition – which took place on February 14 and was streamed live on Facebook – Special Olympics athletes got to enjoy many of the festivities of All-Star Weekend, including the Celebrity All-Star Game, the three-point contest, dunk contest and the All-Star Game itself.

Rob experienced a number of other fun activities during his trip, such as helping former NBA players coach with Special Olympics Illinois; visiting local museums; and exploring Chicago – even in the frigid and snowy weather.

He even learned some professional tips which he brought back to his local Las Vegas basketball competition.

“During the Unified All-Star Game, Muggsy {Bogues} told me to keep going to the post to score baskets,” he said. “I did that at my practices when I came back to Las Vegas.”

And it paid off. Rob’s team earned a gold medal at the Southern Nevada Basketball Regional on March 7, with the recent All-Star scoring a total of 49 points.