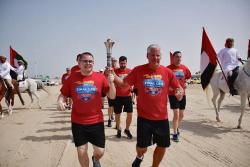 The Law Enforcement Torch Run for Special Olympics (LETR) Final Leg is a time-honored tradition at every world and national games.

Law enforcement officers from participating areas – whether it be states, countries, provinces, etc. – come together to carry the Flame of Hope across the host area to raise funds and awareness for Special Olympics. The Final Leg culminates at the Opening Ceremony, where the Flame of Hope lights the cauldron and the games are officially started.

Case Worker Steve Prentice of the Nevada Department of Corrections had the once-in-a-lifetime opportunity to be a part of the Final Leg at the 2019 Special Olympics World Games in Abu Dhabi, joining 80 law enforcement personnel, 10 athletes and 10 members of the United Arab Emirates (UAE) military police force. The journey took 15 days, covered nine emirates and left Prentice with memories and friendships that will last a lifetime.

“It was an incredible experience,” said Prentice. “Just on our Final Leg team, we had runners from Greece, New Zealand, Canada, the UAE, Illinois... Our team became really close because we were doing so many things together – we ate together, we ran together and we traveled together. It was one of those experiences that you just know, you can feel it, that these are people that you’re going to be in touch with for the rest of your life.”

Each Final Leg team – there were 10 teams of 10 people each – ran multiple miles each day and participated in a variety of cultural ceremonies. Prentice trained extensively to be a part of the Final Leg, running five to six times per week leading up to the trip. He recognized the unique opportunity and wanted to be in the best shape in order to keep pace with his team.

“It really weighs on your mind and you want to be in the best shape so that you’re not holding anyone back,” he said. “I love to run, but I’ve never run in the UAE before. So that was my focus.”

The Final Leg traversed Abu Dhabi, Fujairah, Ras al Khaimah, Umm al Quwain, Ajman, Sharjah, Dubai, Al Ain and Al Dhafra, ending up back in Abu Dhabi for the Opening Ceremony. Prentice explained that, along with the run itself, there could be up to six local ceremonies every day that included cultural dances, food, dignitaries, and tours of museums, landmarks and mosques. His personal favorite was in Ajman, where he had the honor of leading the Flame of Hope into the ceremony – escorted by white horses - and addressed the gathered crowd. Another memorable experience came in Fujairah, when he got to climb to the top of a 16th century fort with an athlete to wave a Special Olympics flag.

“I felt like I was a celebrity,” said Prentice. “I was running to represent Special Olympics, represent Nevada and represent the Nevada Department of Corrections. Everywhere we went, we were treated like royalty. It was absolutely incredible.”

Prentice joked that he personally received some extra celebrity treatment, as well.

“Everyone called me ‘Vegas,’” he explained with a chuckle. “I’d get in a cab with a runner that I was hanging out with from Arkansas. We asked the cab driver if he had ever heard of Arkansas – ‘No, no, I’ve never heard of that.’ Then I’d say, ‘Watch this. Have you ever heard of Vegas?’ And they’d light up. ‘Yeah, Vegas baby!’ Everyone knows Vegas.”

The Torch Run experience was filled with new sights, dazzling buildings and memorable experiences – but for Prentice and many others, there were also things about the UAE that felt very foreign. The extravagant wealth; the hotels and limited food options; religious customs, including early-morning calls to prayer; inconsistent internet access; no credit cards in cabs; and a very different way by which males treated women and workers of a lower economic class.

“We definitely realized that we weren’t in the U.S. very quickly,” said Prentice.

The Final Leg of the Torch Run ultimately led into the Opening Ceremony, where all 7,000+ athletes, their coaches, volunteers and 40,000 spectators packed into Zayed Sports Complex to officially kick off the games. Performers including Avril Lavigne, Luis Fonsi, Paul Oakenfield and others welcomed athletes as they paraded in by country and were cheered on by the Final Leg teams.

“It was so cool to see the athletes parade in and to see the absolute joy on all of their faces,” said Prentice. “They were high-fiving us and we felt like heroes. In that moment, you think about the last 15 days running through all of the emirates and meeting so many people – and this is it. Everyone couldn’t help but to cry because it was absolutely incredible.”

When the Opening Ceremony concluded and the athletes began their week of competition, the Final Leg runners went their respective ways and returned home. Since being back in Nevada, Prentice has used the experience to become re-energized in support of Special Olympics and has a drive to push boundaries for the local athletes.

“It gives you that sense that you want to do more,” he said. “I really enjoyed my time there. Coming back, I know that [LETR] is something that I want to do for the rest of my career. And instead of just being a member, I want to be a part of advancing the program.”