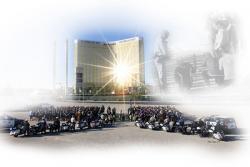 The LETR International Conference is held annually and rotates among cities in the U.S. and throughout the world. Last year marked the first time that Nevada had hosted the four-day event, signifying a major achievement for the program. Activities during the conference included:

Special Olympics athletes also played a major role in the conference. In addition to being in attendance to meet and greet with law enforcement, athletes took on speaking roles at breakout sessions and three general assemblies, which featured 1,000+ audience members. General assembly speakers were Paul Brooks Jr., Rob Doyle and James Stinson, all of Las Vegas, who shared their respective Special Olympics stories and the impact that the program – and LETR – has had on their lives. Lindsay Mibach of Northern California also presented at the Opening Ceremony and received the Athlete of the Year Award.

The 2018 International Conference was a resounding success for SONV in terms of financial impact, global feedback and athlete engagement. Several key figures played major roles in the planning and execution of the event: