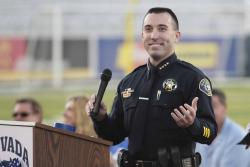 Special Olympics Nevada (SONV) is grateful for the dedicated support of law enforcement personnel throughout the state who volunteer their time to support the athletes at fundraisers, competitions, special events and more. Without these local heroes, SONV would be unable to provide year-round sports competitions, health resources and educational programs to 3,125 children and adults with intellectual disabilities.

Robert Woolsey, the operations lieutenant and acting chief of the Las Vegas Marshal’s Office, has been involved with LETR for nearly 20 years and has grown within the organization to now have an impact on the local, regional and international level. He serves on the SONV LETR Executive Committee, the LETR International Executive Council, is the LETR Region VII coordinator (covering Nevada, Arizona, Utah, New Mexico, Colorado, Northern and Southern California, Hawaii and Guam) and is the former director of SONV LETR.

We invite you to get to know Robert below and learn how you can support LETR in your community by clicking here.

“I am currently employed as the operations lieutenant/acting chief of the Las Vegas Marshal’s Office. In my role, I provided executive leadership including administration, strategic planning, budget distribution and overseeing daily law enforcement operations within an 8,061-square-mile area of Clark County.”

Why does law enforcement choose to support Special Olympics?

“In 1981, a small group of law enforcement officers in Wichita, Kan. identified a need to provide greater support to their community; specifically, those who are typically marginalized and underappreciated.

What began as a simple one-mile run from the Wichita Police Department to the opening of the Kansas Special Olympics State Games has grown into a worldwide movement, spanning the globe and shining the light from the Flame of Hope into every corner of humanity. Law enforcement chooses to carry the Torch and support the athletes of Special Olympics because we rejoice in the display of courage and celebration of diversity that unites communities around the globe.”

How did you get started with LETR in Nevada?

“My story is not unique. Many law enforcement officers have found themselves “volun-told” to attend LETR events over the years and it’s been through those involuntary requests that we have grown to love our role in championing acceptance and inclusion for people with intellectual disabilities. My first interaction with Special Olympics was in 1999 during a Polar Plunge event and I’ve been hooked ever since. Now 18 years later, I still find myself excited about the program and motivated to constantly do more to support our athletes locally and throughout the world.”

What motivates you to continue supporting Special Olympics?

“Special Olympics represents all that is right with the world. For many in law enforcement, myself included, the ability to give back and make the greatest impact on the communities we serve is the ultimate in job satisfaction. Nowhere else do we make the greatest impact than we do in the lives of the athletes and families that we serve. From the high-fives and hugs, to the letters and phone calls, the feeling of love, respect and admiration that I have for my Special Olympics family is amazing and fills my heart year after year.”

What impact does supporting Special Olympics have on you? How have your fellow law enforcement members responded to LETR?

“As a child, I remember growing up with a cousin with developmental disabilities. I remember how difficult it was for him to interact and play with the rest of us, and I also remember the jeers and ridicule he received from others who were not sympathetic or understanding to his differences.

As an adult, it became apparently clear about how those “differences” make all of us unique and important parts of the community. Supporting Special Olympics provides me with an opportunity to make life better for others. I have the chance to enhance inclusion and understanding among athletes and non-athletes. I get to show the world the importance of considering how these differences make us all human and should be honored and embraced instead of shunned. I cannot speak for all law enforcement, but I do know being a part of the Special Olympics and LETR movement have made me a better person and I believe my fellow officers can attest to becoming the same.”

Do you have a favorite memory or experience from your time with LETR?

“In 2014, I received the John Carion “Unsung Hero” Award during the LETR International Conference in New Orleans. The award represents the selflessness shown by a Torch Runner in their daily support and interactions with the Special Olympics community.

For years, I have been devoted to making life better and creating expanded opportunities for our athletes to compete and develop enhanced life skills. I, along with my fellow Torch Runners, do this for the love of it and never question what it takes or decline to participate in activities, simply because it is the right thing to do. To be recognized by my local Special Olympics program and the International LETR community in that way was breathtaking and I will always cherish that.”

What are you looking forward to in the future for Special Olympics and LETR?

“As a member of the LETR International Executive Council and Region VII Coordinator, I am privy to a lot of exciting ideas and programs being discussed and implemented around the world. I look forward to an exciting future, as we continue to deliver the story of inclusion and acceptance into the farthest areas of the globe. I have witnessed amazing things in my time with Special Olympics and I know the future is exciting and empowering for our athletes.”