2017 SONV VOLUNTEERS OF THE YEAR 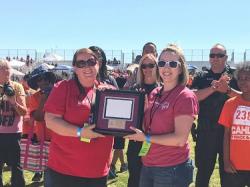 Every year there are thousands of volunteers who dedicate their time and resources to the athletes of Special Olympics Nevada. Selecting just a few to recognize is a very difficult task.

Each of these individuals has stood out in their areas of contribution and has been nominated by their peers for their dedication, service and selfless attitudes to support our athletes. Thank you to everyone who submitted nominations and congratulations to our 2017 honorees!

Volunteer Coach of the Year

“Jim helps coach every sport that Fernley participates in, as well as helps get his athletes involved in community events, not only in Fernley, but in Reno as well. He is an advocate for them in the community and isn't afraid to go out and seek donations or sponsors on their behalf. Jim’s love and compassion for the athletes is heartwarming to watch, and I think that anyone who knows him would agree that he considers them as his family.”

“Derek has been involved with SONV for many years, first as a coach in Las Vegas, and now as GMT. He has built relationships with many of the athletes and cares greatly about them and the organization. He always shows up ready to lend a hand and with a smile on his face. Derek goes above and beyond for Special Olympics and does whatever is needed to help competitions run smoothly.”

Development Volunteer of the Year

“Joyce is the chair of the South Lake Tahoe Polar Plunge committee that annually raises more than $120,000 for Special Olympics Northern California and Nevada. She joined the SONC/SONV board of directors in 2014 and serves as the chair of the governance and engagement committee. In 2016, Joyce secured a $30,000 sponsorship from Greater Nevada Credit Union in support of SONC/SONV.”

“Leslie involves her schools in nearly every activity with SONV, whether it’s disability awareness, creating a Unified Sports day or others. She loves her students and works to engage the larger student body to initiate Whole School Involvement activities.”

“From day one, Jeff has whole-heartedly bought into Unified Sports and has been an advocate for getting SONV into numerous schools in the Washoe County School District. His passion for sports and dedication to his students in every school is incredible to witness. He is a pleasure to work with and brings such a positive attitude to every group of students.”

“Valaree has worked for the Nevada Department of Correctors since 1998 and began volunteering with SONV through LETR four years ago. Since then, she has spearheaded a movement to get corrections involved with the organization and has been a leader in organizing teams for multiple fundraisers, including Bowl for the Gold, Polar Plunge and others. She was recently voted onto the SONV executive committee. Valaree wishes to share this award with her colleagues Michelle Geilder, Tony Cloke and Craig Arnett.”

“Last year as a high school freshman, Tia was the lead organizer in bringing the first Schools Partnership Program event to Northern Nevada. She has broadened her role and organized her high school's Respect Week, which was a huge success. Tia took her first event and expanded it to plan for multiple sports and a schoolwide campaign for inclusion. Among the numerous other activities that she is involved with, she also frequently volunteers at SONV community sports competitions and truly shows dedication to the organization as a whole.”